The fifth incarnation of Johnson’s Willow (grown from a cutting of its predecessor) was planted beside Stowe Pool in Lichfield on Tuesday, 2 November 2021 in a ceremony arranged jointly by the Johnson Society and Lichfield District Council (to whom we are most grateful for their work on perpetuating the tree). The following video and images show the ceremony in progress.

The guests at the ceremony assemble around the Fifth Willow before its planting.

Phil Jones (Chairman of the Johnson Society) introduces the ceremony. 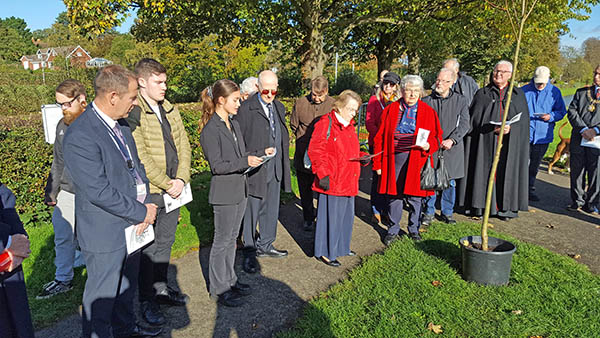 John Winterton (Heritage Officer, the Johnson Society) speaks about the history and meaning of Johnson’s Willow.

David Titley reads a selection from ‘Two Odes on the Litchfield Willow’ (1787) by the American poet Elizabeth Graeme Fergusson. 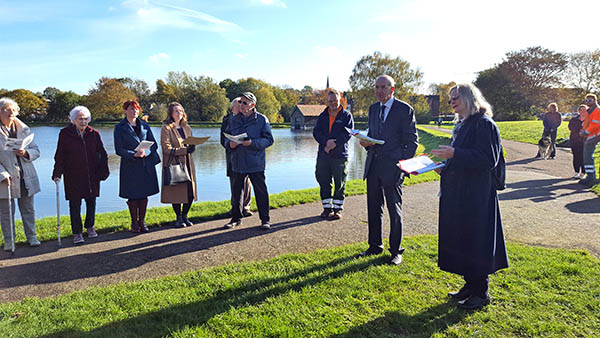 Sarah Dale (with assistance from Phil Jones) reads her poem ‘Resurgam – I shall rise again: Johnson’s Willow’, which won first prize in the Johnson Society’s competition to find the best new poem about the Willow. 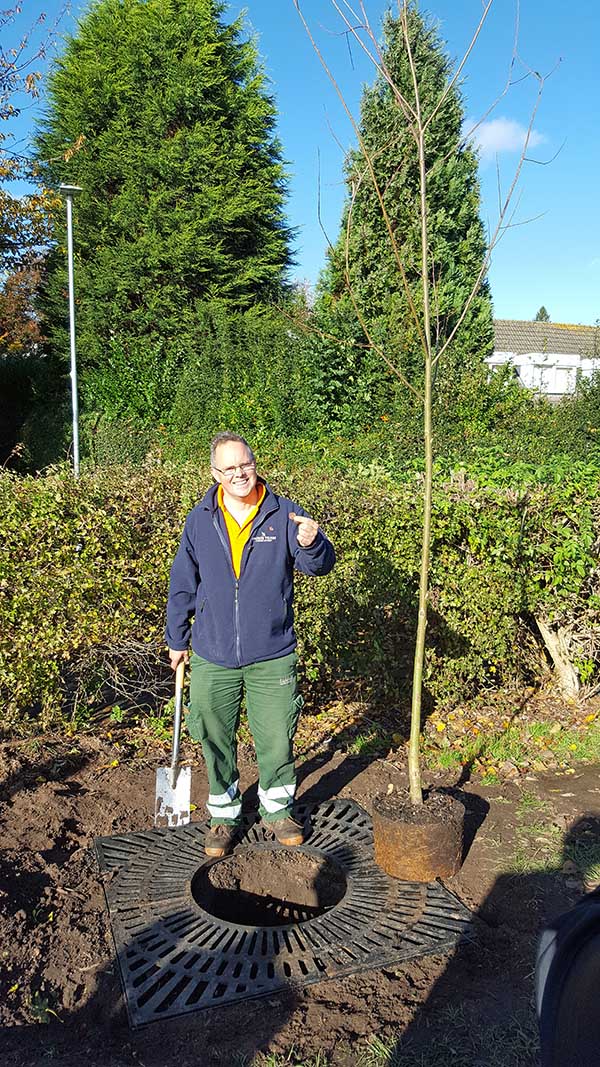 Paul Niven placing a coin (2p!) for luck under the Willow before it is planted. 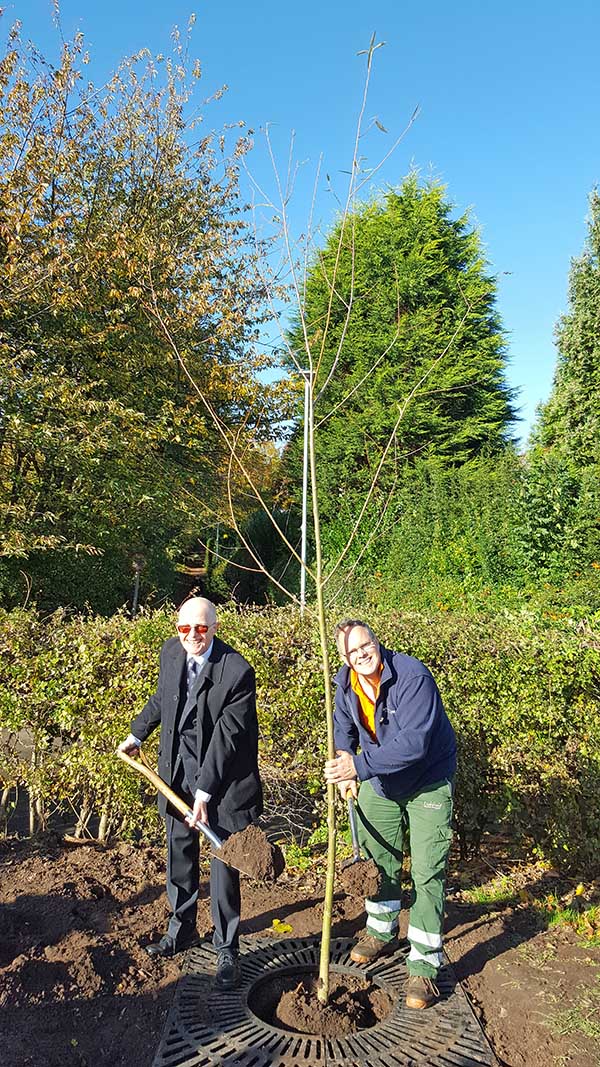 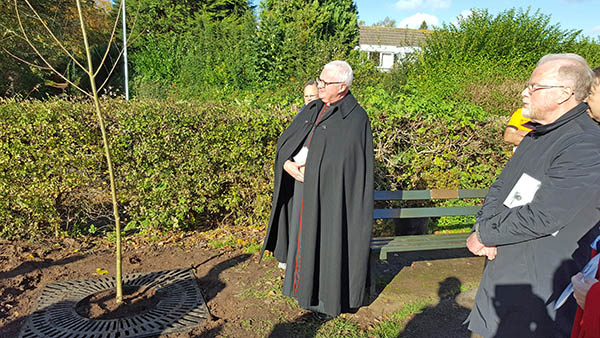 The Very Reverend Adrian Dorber, Dean of Lichfield, leading a blessing and prayer for the new Willow.

Phil Jones, Sarah Dale and John Winterton by the Willow.

Members of Lichfield District Council’s Parks Department and (third from left) Mike Evans of Acme Tree Services with the Willow. 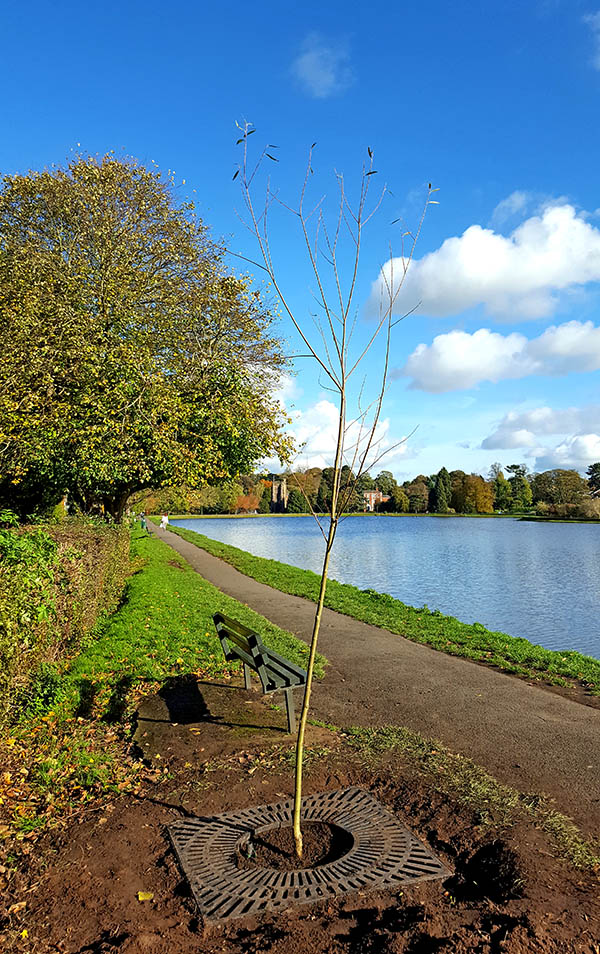 The Fifth Johnson’s Willow after its planting.

The new Willow in its protective cage – long live the Fifth Johnson’s Willow!

On the morning of Saturday, 18 September members of the Johnson Society joined civic dignitaries in a procession from the Guildhall to the Market Square, where a wreath was placed on the plinth of the Johnson statue by the Mayor of Lichfield, Cllr Robert Yardley (photos by Stephen Brierley).

In the afternoon, the Johnson Society held a special Johnson Birthday Tea in the grounds of Lichfield Cathedral School (the former Bishop’s Palace), in the course of which the celebrated cartoonist Posy Simmonds was installed as the Johnson Society’s President for 2021–2 (photos by Richard Thompson and Stephen Brierley).

A delightful feature of the Birthday Tea was the performance by Michael Guest (singer) and Nigel Argust (accompanist) of two songs (‘An Evening Ode, to Stella’ and ‘The Winter’s Walk’) with words by Johnson and music by Haydn; videos of these two songs can be viewed below (videos by Phil Jones and Stephen Brierley).

On the morning of Sunday, 19 September a special Johnson service was held in Lichfield Cathedral. During the service, a wreath was placed below the bust of Johnson in the cathedral’s south transept by the Johnson Society’s Chairman, Phil Jones (photo by Stephen Brierley).

The concluding event of the Birthday Weekend, on Monday, 20 September was the commemoration of Johnson’s act of penance in Uttoxeter Market Place. The Johnson Society’s Chairman, Phil Jones, gave a short talk, and the Mayor of Uttoxeter, Cllr Chris Sylvester, then placed a wreath on the Johnson memorial (photos by John Winterton). 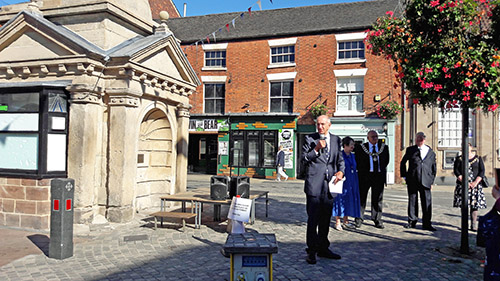 Today saw the welcome return of this annual event, again led by Colin Greatorex. In addition to Johnson’s Willow, the tour took in numerous other sites connected with Johnson. The traditional theme of friendship was sustained by the presence of representatives from the Lichfield Cathedral Chorus (morning walk) and the Lichfield U3A Poetry Group (afternoon walk); members of these groups (George Arblaster and Martin Hellawell respectively) gave readings at the Willow, where the traditional toast to the tree was also offered.

Thanks are due to Colin for arranging and leading the walk, to Richard and Marilyn Davies for presiding over the refreshments at the Willow, to the readers, and to Donna Greatorex for the photographs. 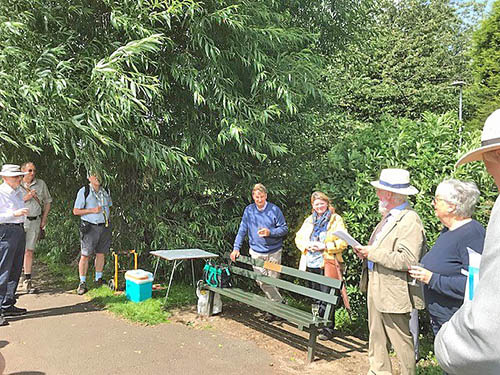 The Johnson Society’s Annual Lecture for 2021, ‘A “Neutral Being Between the Sexes”: Debating Johnson’s Feminism’, was held via Zoom on 2 March. In a change from the usual format, Kate Chisholm and Michael Bundock debated Johnson’s complex attitudes towards women. Their presentation (a video of which can be viewed below) was greatly appreciated by the audience, and stimulated much interest, as shown by the lively question and answer session that followed.